It’s been a couple of weeks since I’ve blogged. I’ve been finishing up at my job at INASP and busy applying and preparing for interviews and it’s rather taken over a bit. However, I did finally get down to the lottie the other day and can now report on what did and didn’t survive the heavy snow. 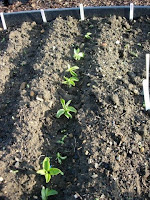 First up is the Broad Beans. For over-wintering, I had planted Aquadulce Claudia, The Sutton and Crimson Flowered. The Crimson Flowered (left) were just a trial. I had only ever planted them in spring before and have found that the blackfly rather likes them and this could inhibit growth. Though the flowers were very pretty, crimson (!), I found if you didn’t get to picking the beans quick enough, they would not taste as good (though ok for a Lebanese Fava Bean dish, I think the corriander, garlic and lemon helps). So I didn’t know what to expect by planting them in autumn. As you can see, they have done very well and of all my broad beans, these are the perkiest post-snow. Will be interesting to see how they grow into spring, and the onset of the dreaded blackfly in late-spring-early summer.

Aquadulce Claudia (right) is known as THE broad bean to plant for over-wintering. However, as you can see here, they are looking a little sorry for themselves. Some of the beans haven’t germinated either, although maybe some got nicked by mice. I’ll sow some more come February to fill in the missing plants.

My third type of Broad Bean, was The Sutton (below). This was another experiment. It is said these might be sown in autumn, so I thought I would give it a go. They are looking ok, better than the Aquadulce Claudia, though again some missing plants so will do another sowing in February. Also, it is possible I should have planted them under cloches or cover for autumn sowing. Will try again next autumn and see what happens. I haven’t grown The Sutton before, so just going hearsay that they are a bean worth trying. Overall, I’m pleased that the broad beans largely survived the heavy snow. Yes I have to sow a few more plants in Feb, but I tend to find this happens most years when there hasn’t been heavy snow, so feel the overall success rate has been good. 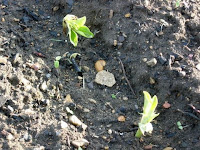 Now, onto a failure. Not, I hasten to add, because of the snow, but because of, I suspect, Pigeons. Look at my poor brassicas! If you look carefully, you will see that the tops have been ravaged. During summer and autumn I did have agricultural mesh covering them in a cage to protect them from the darned Large White cabbage butterfly, but then removed it for winter since the butterfly is not around then. 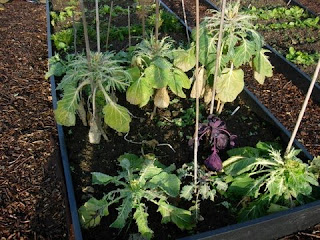 I recall someone at the Lotties expressing suprise that I had taken down the mesh cage at the time, mentioning they might get attacked by pigeons. However, based on previous experience, I wasn’t worried. SILLY ME. Previous experience was based on growing brassicas in the back garden in Witney, where we had Merlyn the cat prowling around, stalking pigeons and anything else that moved. I didn’t have any problems with pigeons there. But Merlyn doesn’t get down to the lottie; really, he needs to do more to earn his keep. Just shows you how contextual growing is. Suffice to say, next year the agricultural mesh cage will stay on!

Returning from the ‘dark side’, I can happily report that my carrots, d’Eysines Large Half-Long (right) that I have been growing under cover, are doing absolutely fine. Look at the happy bunnies.

More interesting, is the how the lettuce Winter Density has done. On the left are those that were growing completely in the open. They are looking rather sad, but if I’m lucky and we don’t get any further snow they may perk up and get growing again. On the right are those that happen to have been sown next to the carrots and therefore got a bit of protection from the cloche covers I put over them (you can see the make-do cloche covers below, just a bit of perspex from a broken mini-greenhouse). These are doing much better and I have confidence they will definitely continue to grow and I should be able to pick lettuce once it warms up again. And what has this taught me? Put my Winter Density under cover and I’ll be able to pick lettuce through the winter. Guess what I’ll be doing next year…

Finally, still no sign of the garlic. I guess the snow kept them dormant for longer (I think that’s what happened, does anyone know if this is right or wrong?), but hoping that the unfreezing will now mean they kick into action. Here is an overview picture of the lottie beds post-snow (plus those ‘cloches’ I’m using for the carrots). Might look neat, but I happen to know that the weeds have already started growing. Next job. 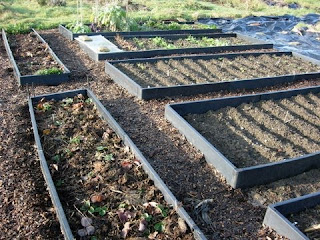